skip to main | skip to sidebar

Thumbing through a book on Frank Lloyd Wright architecture at the Friends of the Experimental Farm used book sale on Saturday, I came across the following handwritten note.

A red jacket
good hoop earrings
a DVD player with VCR
digital camera
someone to design my interior!
joy!
sex before dinner 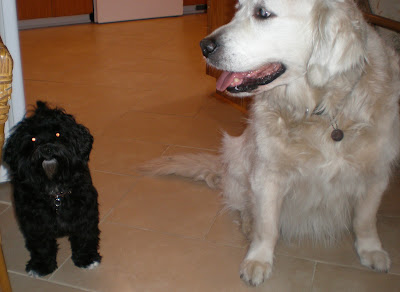 Logan and I went to Montreal today to help celebrate my sister-in-law's birthday. Logan finally got to meet his cousin Molly (excuse the lousy cropping).

Duncan decided to stay home with his drinking buddy. Not a very eventful night last night. Duncan and I just sat around with our knitting and reminisced about the good old days. It went something like this:

Duncan-the-DogCat (DDC): Remember the days when I would bring a mouse upstairs and knock it around the livingroom like a punching bag?

DDC: And remember when you would give me snacks and try to distract me?

DDC: And remember when the only thing that would REALLY distract me was a big can of tuna fish? Those were the good old days, eh? 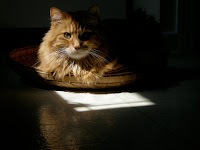 Picture this... I was playing Bejewled on the computer in the living room. Duncan was pawing me and meowing. I said "DUNCAN, NOT NOW!!!" The next thing I know he's playing with his catnipped mouse, swatting it across the floor the way he normally does and then pouncing, except he usually stops after a few swipes. This time it was going on for a while so I stopped to observe.

It was alive... the catnip mouse was alive!!!

It looked just like one of Duncan's toys except it had eyes that moved!!!

It was curled up in a fetal position and then he swiped it again. It rolled and quivered. Duncan picked it up and moved it across the floor and kept playing. I didn't know what to do. That poor mousey. I tried to give Duncan a salmon kibble snack but he wouldn't take the bait. I even shook his catnip container. That usually makes him excited with anticipation, but this time he only paused. He looked at me. He looked at Mousey. He looked at what I was holding. He swatted Mousey again and chased it across the living room floor ignoring the catnip. He was enjoying the moment. No point in getting stoned!

The way he handled that mouse, I wondered how Mousey could possibly still be alive. I had to DO something. I formulated a plan. I took 2 of Logan's poop bags out of my back pocket and doubled them up. I went to the fridge and pulled out some of Duncan's dental treats. I tossed them near Duncan and when he paused for a moment. I scooped up Mousey and put him on the back porch.

Then I felt doubly bad. I had taken away Duncan's pet and there was a mouse suffocating in a poop bag on the back porch. Duncan ate the treats and then looked everywhere for Mousey. I went out back and carefully emptied the bag in the laneway. I figured perhaps the drizzle might revive Mousey and he would live to tell the tale of the Monster Dog Cat... or another neighbourhood cat would cart him off as his own.

Duncan went back to the basement and sat in the bathroom staring at the hole in the wall in the cupboard. It's a fairly large hole. He just sat. I went to the computer and every 5 minutes I went back to check on him. Duncan was still there, just sitting and staring, occasionally glancing up at the ceiling. One time I went back and he wasn't there... nowhere. I looked through the laundry room, the storage room, everywhere. There was no sign and no sound. I figured he must have gone into the hole in the wall.

It was midnight... I was alone! My sweetie is away. How I miss her!!! There was a mouse on death's doorstep lying in the gutter in the back laneway. My cat had disappeared into the tunnels beneath the house. How could I possibly go to bed?!

I lay down and read. Eventually I drifted off. In the middle of the night, I awoke to Duncan licking my face. I remember thinking "Ewww, he had mouse on that tongue" and I pulled him away from my face and we gently snuggled ourselves back to sleep.
Posted by skylark at 10:34 AM 10 comments:

"Tsimmis", a traditional Ashkenazi dish is a sweet vegetable stew and has become one of Zoom's favourite dishes from the Jewish fare.

Even though we just ate tsimmis days ago at the Passover seder, I offered to make another batch for Easter dinner at Zoom's house. It would be a test to see if tsimmis could hold it's own with a non-Jewish crowd.

Well it was such a hit that I promised to post the recipe.

1. Soak prunes, apricots and raisins in boiling water for 1/2 hour, until plump. Drain well.
2. Meanwhile, cook carrots and sweet potato in boiling water until tender but firm, about 15 minutes. Drain well.
3. Mix together the drained prunes/apricots/raisins with the drained carrots/sweet potatoes. Add the reserved pineapple juice and all the other ingredients EXCEPT the pineapple chunks.
4. Place mixture in a sprayed 3 quart casserole and bake covered in a preheated 350°F oven for 35 minutes.
5. Stir in pineapple chunks and bake uncovered 15 minutes more, stirring once or twice.

*From MealLeaniYumm! by Noreen Gilletz.
Posted by skylark at 1:13 PM 3 comments:

Yours, Mine and Ours

Cookie Girl told me she was looking at the Ottawa Humane Society's blog and saw a couple of lovebirds up for adoption and their names were Robbie and Suzie, just like ours. What do you the think the odds of that are? She said we just HAD to go meet them.

And so we did and you know what, we fell in love with Robbie and Suzie.

So Cookie Girl and I ran to Pet Smart, bought all the things lovebirds need: a cage and toys and different kinds of pellets and seeds and perches, and then we scooted back to the Humane Society before Last Call for Adoptions.

As I looked over the adoption papers, I smiled when I saw listed as the birds' names "Romeo" and "Juliet". Cookie Girl asked me why I was smiling. I said "Nothing" and signed the papers. We are now proud parents of two 11-month old lovebirds.

"You know," I said to Cookie Girl in the car on the way home, "it might be a little corny to call them Robbie and Suzie. Maybe we should think of new names."

"How about Romeo and Juliet?" suggested Cookie Girl with a devilish smile, but we both agreed those were stupid names.

I think we'll go with Billie and Lester (Billie Holiday and Lester Young) unless you can think of something better.

The Castlebrook Village Breakfast Club is meeting Saturday morning and has kindly agreed to an early sitting so Cookie Girl and I can get to Wakefield for 10 a.m. I look forward to CV Breakfast Club because firstly I love to go out for breakfast and secondly because it will give us a chance to catch up on all of our summer adventures. Topics will likely include Trip to Wine Country - California, Trip to the Maritimes, New Vehicles, and Discussion of Past and Upcoming Surgeries. Who'd want to miss an agenda like that!

Following breakfast, Cookie Girl and I will zoom up to Wakefield for the Chelsea/Wakefield 2009 Artists in Their Environment Studio Tour. I'm not familiar with very many of the artists on this tour, but CG is pretty excited about it and she hasn't disappointed yet! Last night we bumped into Sue Glazer at the City of Ottawa Art Exhibit. Turns out Sue's jewellery studio is part of the tour. 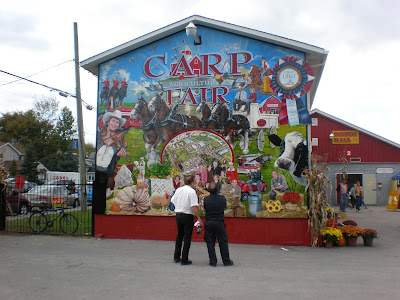 Who could forget the silly mirrors! 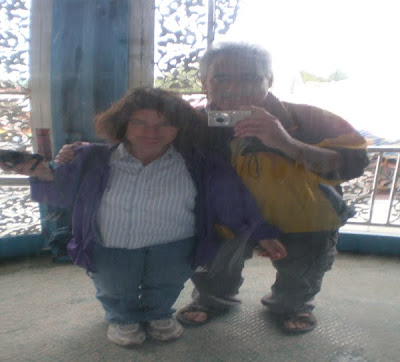 For those of you who missed the West End Studio Tour last weekend, you get a second chance. Look for our favourites Garry Bea Joyce and Andrew King.
Posted by skylark at 4:04 PM 2 comments: 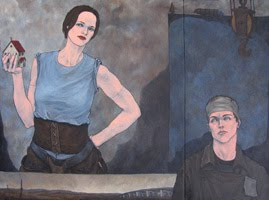 It's Cookie Girl's Son's birthday Thursday and she always makes chicken balls for his birthday dinner. When Son of CG asked if we could do chicken balls Wednesday instead of Thursday, we realized we could now go to the Opening Reception of The Collection's Cabinet at the City Hall Art Gallery. One of my local favourites, Reid McLachlan, will have at least one piece on display.
Happy Birthday Son of CG.
Posted by skylark at 9:17 AM 2 comments: 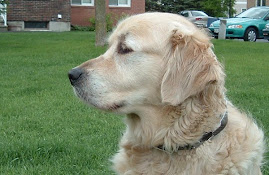 What I Read to Logan